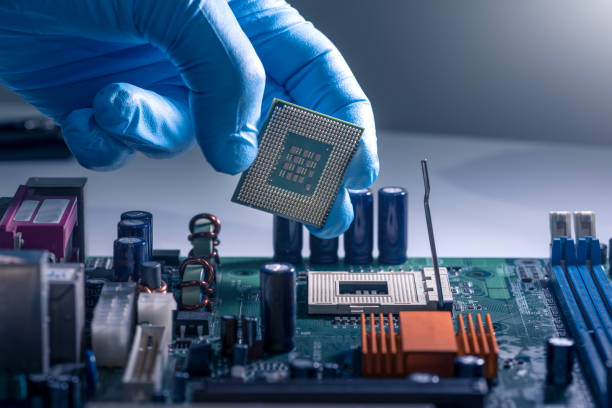 Your CPU (Central Processing Unit) is the brain of your computer. If you’re into the PC gaming scene or have shopped for a new desktop or laptop within the last decade, you’re no stranger to the nomenclature; i3, i5, i7 and the most recent – i9. If you’re not sure what these designations mean, check out our article about Intel’s naming scheme. What you may not have realized is that among the sea of Intel processors, a competitor has been fighting for a larger part of the market share – AMD. AMD (Advanced Micro Devices) is a lesser known manufacturer to the mainstream market and often the “laughing stock” of the enthusiast community. AMD got its start selling CPUs while working with Intel as a distributor. They are best known for the development of the 64 bit architecture that the device you’re using to read this article likely uses. For the most part, all operating systems post Windows XP (Professional) utilize the 64 bit architecture because of its versatility and higher data processing ceilings. For example, 32 bit operating systems have a theoretical maximum of 32 GB accessible RAM whereas 64 bit operating systems have a theoretical 16.8 TERABYTES of maximum RAM. To put things in perspective, many modern enthusiast grade machines have between 16 and 32 GB of RAM as it is; Hyper-V servers up to 128 GB.

Intel has stayed in the lime light for the past several generations of processors, focusing on single core performance over multi-threaded optimization. If you don’t quite understand the pros and cons of hyper-threading versus single core performance, visualize it like this: single core performance is akin to a burly guy that lifts heavy weights and is efficient at loading bales of hay into a rendering machine. The strong guy (CPU core) can lift heavier individual bales of hay (handle a single heavy workload), but if he’s got a lot of bales to render, it’s going to take him more time. Hyper-threading is akin to several guys that aren’t quite as burly, but work together to split the workload between them. This is a very loose comparison, but you should get the point.

AMD, on the other hand, is the premier choice for hyper-threading and multi-core performance. While AMD processors may be lackluster in terms of single core performance, their multi-threaded optimization is second to none. AMD processors (specifically the Threadripper series) are usually loaded with more cores, hyperthreading technology, and are overclockable. If you want to play Crysis 3 at maximum settings, you’ll likely be disappointed with an AMD processor. However, if you need to render 8K video, edit high resolution photos or add intricate effects to your videos with Adobe Lightroom, AMD takes the cake – bar none.

Intel and AMD have been at each other’s throats when it comes to stealing the spotlight since 2017. Previously, Intel had maintained the spotlight since 2006 with innovation and performance that was unmatched by AMD. That is why every time Intel announces a new processor generation, enthusiasts all over the world can’t help but be on the edge of their seats, anticipating the newest features, awaiting the benchmarks and getting ready to open their wallets to purchase the greatest thing since sliced bread… Until they realize that they’re going to have to open a home equity line of credit on their sixth mortgage to obtain it.

Intel is no stranger to controversy recently, especially regarding the latest addition to their product lineup (i9-9900k). The i9-9900k was proposed to be the most powerful consumer grade processor to ever hit the market. With 8 processing cores, 16 threads and a lightning fast boost clock of 5.0 GHz, the 9900k was going to rock the PC world…

User benchmarks littered YouTube and a myriad of other websites where people go to see if the latest and greatest lives up to the hype. Consumers were outraged – a brand new processor retailing (at launch) near $600 was just barely squeaking by previous generation processors like the i7-8700k, with benchmark improvements reaching nowhere near what the manufactured hype lead them to believe. Marginal improvements, rarely above 10% the previous generation at 175% of the cost got underneath the skin of people willing to shell out their bottom dollar for top performance. Not only did Intel release an obvious cash grab 9900k, they released the 9th generation i7-9700k – but stripped the hyper-threading technology from it. This brazen, insulting act of greed (read: compartmentalization) caused an uproar in the community. People are angry that Intel has the audacity to try to goad people into purchasing the higher, more expensive i9 series over the i7 just to obtain hyper-threading capabilities.

AMD, on the other hand, had been relatively quiet until they released a bombshell announcement in 2017 – Ryzen series processors. They would not match Intel’s performance though and AMD was relegated as a budget/value chip that you picked up only if you could not afford Intel’s prices. The next year Ryzen 2000 closed the gap more, but it still was not enough. Then on July 7th, AMD released their new product lineup of 3600, 3700, 3800 and 3900 X series processors. Obviously, the higher the number, the better. AMD touted benchmarks of the 3900X to be comparable to the i9-9900k’s benchmarks and better then the 2000 series by a ridiculous 15%; a number that was quite literally unheard of recently. With benchmarks like that, AMD was sure to tack on a comparable price tag, right? Not quite. The Ryzen 7 3900X MSRPs at approximately $500, which is what the i9-9900k can be commonly found at now. That carried on across the board as AMD strove to continue its reign in price to performance. However, just as benchmark promises come from Intel, AMD faced the same scrutiny.

AMD would live up to their proclamations in single core performance, but not to what the consumers were hoping for. While the 3900X absolutely annihilates the i9-9900k in multi-threaded performance (by upwards of 30% in some benchmarks!), the new Ryzen processors still falls behind by 5-10% in heavy single core applications. Also, while AMD gives you overclocking on all their chips, Intel has shown to have much more potential, as long if you can pay for a unlocked processor (includes a K on the end).

Intel and AMD have both developed large communities of brand loyalists; Intel communities being people who look the other way when it comes to questionable business practices and ridiculous price premiums versus AMD loyalists who like to root for the underdog and turn a blind eye to benchmarking results.

All things said, the right processor for you depends on what you want to do with it. If you have deep pockets and want to play PC games at frame rates that are double your monitor’s refresh rate, go with Intel. If you’re a content creator, graphic designer, or video editor and need to render intense, high resolution video 5 minutes ago – go with AMD. If you have any questions or need help picking out parts for your next build, call Iler Networking and Computing at 440-322-4537.